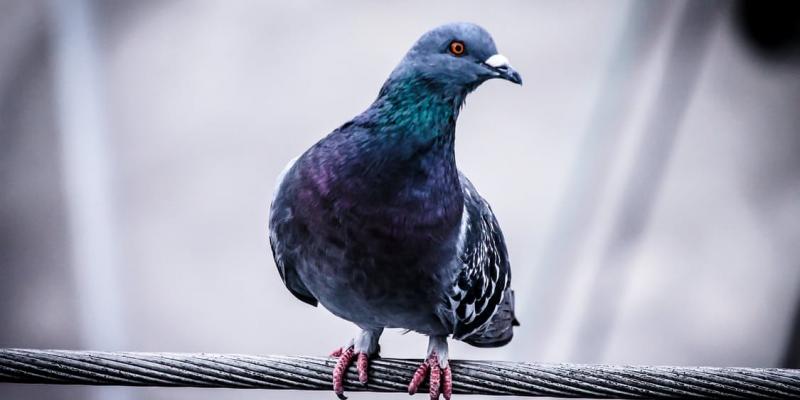 Most people don’t think of birds as nuisances, at least not until they deal with these loud, invasive animals firsthand. The six common birds in New Jersey you’ll run into are European starlings, feral pigeons, house sparrows, woodpeckers, cliff swallows, and seagulls. If any of these unwanted birds have made your home their own, our Newark bird control will safely and quickly handle the problem.

Woodpeckers have adapted the majority of their features to assist with foraging on the sides of trees. Their beaks are tough and sharp, making them perfect for chipping away at tree bark in search of insects. Their tongue, which is about four inches long, is covered in a glue-like substance that makes it easier to extract bugs once they’ve been uncovered. Woodpeckers also have feet with two toes pointing forward and two backward, which helps them hold onto trees. They even have stiffened feathers over their nose to prevent them from inhaling wood particles.

Where do Woodpeckers Nest?

Woodpeckers nest inside of hollow trees. They pick trees with very little vegetation on the ground, minimizing the danger of predators like snakes, and typically create the nest cavity themselves rather than find an already hollowed-out tree. Although less likely, woodpeckers will also nest in roofs, walls, and attics or on top of fence posts, barns, utility poles, and other lofty structures.

The Problem with Woodpeckers

By drumming or pecking on wood, woodpeckers create a noisy racket while also causing damage. While they prefer trees, woodpeckers pecking houses have also occurred. They do this to eat the insects that live in the siding, mark their territory, or to attract a mate. This results in small, irregular holes, not to mention an annoying sound.

There are many different species of seagulls, and while their looks may vary, most do have similar characteristics. These include grey and white bodies with black spots, long wings, webbed feet, and a hooked bill. They are proficient at flying, as well as walking and swimming. Seagulls are also highly intelligent -- capable of tricking worms to surface by stomping to imitate rain.

Where do Seagulls Nest?

Seagulls are found all over the world, even in Antarctica and unforgiving deserts. They can live in such a wide variety of places due to their highly adaptable nature. Seagulls tend to nest in colonies that can range from a few pairs to hundreds of thousands of birds. Their nests themselves are created wherever there is space, including cliffsides, trees, and residential rooftops.

The Problem with Seagulls

Seagulls are often aggressive when it comes to food, crowding and even attacking people to claim their lunch. Their droppings can cause erosion, damaging surfaces like rooftops, boats, and streetlamps. Droppings can be hazardous to humans, creating a slip hazard as well as spreading bacteria that can cause serious illnesses. Seagulls are also loud, and their large flocks often create noisiness that interferes with life in residential areas.

House sparrows are small birds with full chests and rounded heads. Their bills are short and thick, adapted for cracking open and eating seeds, their main food source. House sparrows typically have grey or brown bodies with white and black accent stripes. These birds were originally brought over from England to control caterpillar populations to protect trees, shrubs, and other plants.

Where do House Sparrows Nest?

House sparrows got their name for a reason; they tend to build their nests near human habitation, including in or on residential buildings. They’re notorious for building nests in areas like light fixtures, awnings, electrical boxes, and gutters. If given the chance, house sparrows will also fly inside open doors or loading docks to nest inside buildings. They also nest all year long, staying in the same region as opposed to migrating for the winter.

The Problem with House Sparrows

By nesting in problematic areas, house sparrows can cause serious consequences for homeowners. When they nest in phone boxes or service stations, they can cause poor conductivity of energy and interrupt communication to homes. More seriously, by nesting in electrical boxes, they can cause fires that result in devastating damage.

European starlings are capable of mimicking other species of birds, producing around 20 different imitations. They’ve even been observed to imitate phones and cars. European starlings look similar to blackbirds, with black iridescent plumage and slender, yellow beaks. They are also extremely social birds, traveling in large flocks that can contain other species of starlings and even species from other bird families.

Where do European Starlings Live?

Shelter is one of the most important things for European starlings and they’ll build their nest in any type of cavity. Most commonly, they’re built in hollows of trees, birdhouses, building crevices and corners, and even cactus holes in the southwest. Males typically begin the nest and sing to attract a female, who will then complete the project.

The Problem with European Starlings

European starlings cause massive damage to the agricultural industry by eating cattle rations, destroying grain crops, and decimating fruit crops. As an introduced species, they also create competition for resources, negatively impacting the health and population of native bird species.

Their short, stocky build makes it easy to identify cliff swallows. They also have long wings, a squared-off tail, and are usually brown with white and black accents. Cliff swallows are social birds and are almost always found in colonies that can number in the thousands. They’ll even lay eggs in another flock member’s nest.

Where do Cliff Swallows Live?

Cliff swallows build their mud nests in a variety of locations, including cliffsides, caves, eaves of buildings, pipes, dams, and large trees. The nests are made where a vertical wall meets a horizontal overhang. When winter comes, these birds will leisurely migrate through Mexico, Central America, and eastern South America to wait out the cold weather.

The Problem with Cliff Swallows

Their close proximity to people can cause cliff swallows to become both health hazards and hazards to building safety. Their droppings can cause aesthetic problems, as well as contaminate food sources with bacteria, fungal agents, and parasites. Cliff swallows’ nests have also been found to contain mites and swallow bugs, which are similar to bed bugs and will bite humans.

Pigeons are common birds, almost always found in major cities that have large people populations. Their characteristic features include a blue-grey head, green or purple chest, red feet and legs, and a black bill. Unlike other birds, pigeons don’t need to migrate. They are capable of withstanding both the cold and snow, making it unnecessary for them to seek out warmer climates in the winter. Pigeons were once domesticated, but escaped birds created flocks with other birds, forming a feral population.

Where do Pigeons Nest?

These birds will construct a nest anywhere they can, but prefer to make their homes on window ledges and overhangs of city buildings, which mimic the rocky cliffs pigeons originally inhabited. Pigeons nest near food sources, which can include farm yards, grain elevators, feed mills, parks, and restaurants.

The Problem with Pigeons

Where there is one pigeon, there are most likely dozens, even thousands, more. Their numbers can be overwhelming, making it difficult to effectively deal with them. They also carry a variety of diseases, including E. coli, histoplasmosis, and salmonellosis, that can be transmitted to humans through their droppings. The more feral pigeons in an area, the more droppings that are present, which increases the risk of infection.

What to do About a Bird Problem in New Jersey

It’s best to let an expert handle the bird removal process to ensure it’s done safely and successfully. After all, birds carry a variety of diseases that can be passed onto you and your loved ones, not to mention they can cause bodily harm when they feel threatened. With our bird control in Newark, your bird problem will be swiftly and humanely controlled through methods such as:

The longer you let birds nest on or in your home, the harder it becomes to remove them. Rather than wait, call Corbett Exterminating today. With our professional bird control service in Newark and the surrounding areas, you’re guaranteed to see results.

Common birds causing a nuisance in your home? Our bird control service areas include:

REMOVE BIRDS IN YOUR HOME TODAY

What Our Customers Are Saying

Thank you for your monthly service at our building. Great service!